Back to Upcoming Education
Open to the public 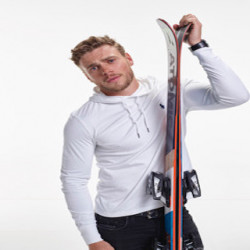 Gus Kenworthy is one of a kind, not just for his skiing, but for his personality, determination, advocacy, and heart. Born in Chelmsford, Essex, UK, Gus’ family moved to Telluride, Colorado when he was 2 and began skiing shortly after. He picked up his first sponsor at the age of 16, and at 27 years old he continues to push the sport and establish new boundaries. His dedication to his craft established him as one of the top park skiers in the world, and one of a select few athletes that consistently makes the podium in slopestyle, halfpipe and big air events.

At the age of 23, Gus earned the privilege of representing the United States in the 2014 Olympic Games in Sochi, Russia, proudly bringing home the Silver medal in Slopestyle. After the city of Sochi decided to kill stray dogs during the 2014 Olympics, Gus arranged for four stray puppies and their mother to come back to the United States. Drawing attention to the plight of rescue animals, Gus became an activist and advocate for the well-being of dogs, partnering with Humane Society International. In 2015 Gus made the bold and courageous decision to come out as an openly gay man. Never one to shy away from the camera or his fans, he chose the cover of ESPN magazine as the vehicle to deliver the news and received widespread support, love and praise for the choice to reveal his true self. He then went on to make history as one of only two openly gay men to compete for the United States at the Winter Olympics in Pyeongchang, South Korea in 2018. Prior to his qualifying run for slopestyle, Gus kissed his boyfriend on camera, immortalizing it as the “kiss seen round the world,” an iconic moment for the global LGBTQ and sport communities alike. Gus transitioned into his new role seamlessly, using his fame to bring to light issues he is passionate about. No stranger to activism, Gus announced in 2019 that he would be participating in the AIDS/LifeCycle ride, a 545 mile bike ride from San Francisco to Los Angeles, pledging to raise $1 million dollars for the organization. He also works with the Trevor Project in an effort to prevent suicide in LGBTQ youth, along with the Happy Hippie Foundation aiding homeless and LGBTQ kids.

Gus’s versatility as a public figure is unlimited. In 2019, he made his acting debut on “American Horror Story: 1984,” the wildly popular horror show is in its ninth season. Beyond his athletic prowess, Gus has become a symbol of hope and acceptance, transcending boundaries and overcoming obstacles, proving to be a one of a kind icon. Gus’s talent has no bounds, through his success as an Olympic medalist in skiing, his efforts in activism, and overall star power, Gus Kenworthy has established himself as a global icon.