Meet the Artists: ‘The Art of the Graphic’ Closing Party at Vermont Ski and Snowboard Museum 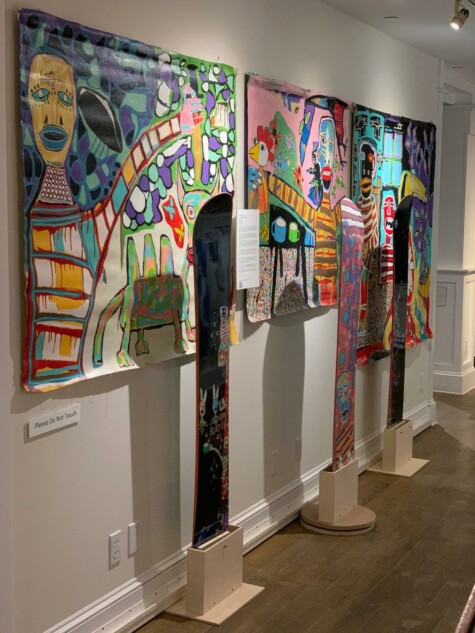 It’s not too late to catch ‘The Art of the Graphic’ exhibit at Vermont Ski and Snowboard Museum in Stowe, and to meet the artists who contributed to it, at a closing party Friday, September 30th from 5:00 to 7:00 pm. The exhibit looks at the artistic process of creating graphics for skis and snowboards. Featuring the work of both large and small brands, and known and unknown artists, ‘The Art of the Graphic’ exhibit lets the viewer see the process from initial concept to final product. Admission is free, but donations are greatly appreciated. To ensure the Museum doesn’t exceed capacity, please RSVP www.vtssm.org/new-events/2022/9/30/exhibitclosing.

The eight displays are a cross section of concepts from original paintings to computer generated art. For snowboards, graphics from Burton feature collaborations with well-known artists Scott Lenhardt and Mark ‘Gonz’ Gonzales, both doing graphics for Danny Davis’s Deep Thinker series and painter/musician Mikey Welsh working with graphic artist Dennis Healy on the Farm series. Pallas Snowboards, a women’s only brand, shows a graphic collaboration between painter Mishel Schwartz and graphic designer Lenka Prochazka. Finally, Rome Snowboards art director Michael Paddock shows how graphics can come from unlikely places, in this case the doodle board in the marketing office at Rome.

The Art of the Graphic would not have been possible without the support of our members and from Burton Snowboards and Darn Tough Socks. The Museum is open Thursday through Sunday from noon to 5:00.

About VTSSM – Since 1988, the Vermont Ski and Snowboard Museum has been dedicated to collecting, preserving, and celebrating the rich history of skiing and riding in Vermont. The museum is a 501c3 non-profit that survives on the support from the ski and snowboard community.

The Vermont Ski and Snowboard Museum thrives by collecting, preserving, and celebrating Vermont’s skiing and snowboarding history. The Vermont Ski and Snowboard Museum is a 501c3 non-profit organization that welcomes visitors from around the world to share, reminisce, and enjoy the collections and their stories. The museum creates visually stimulating and historically in-depth exhibits, along with year-round educational programming and statewide community events.